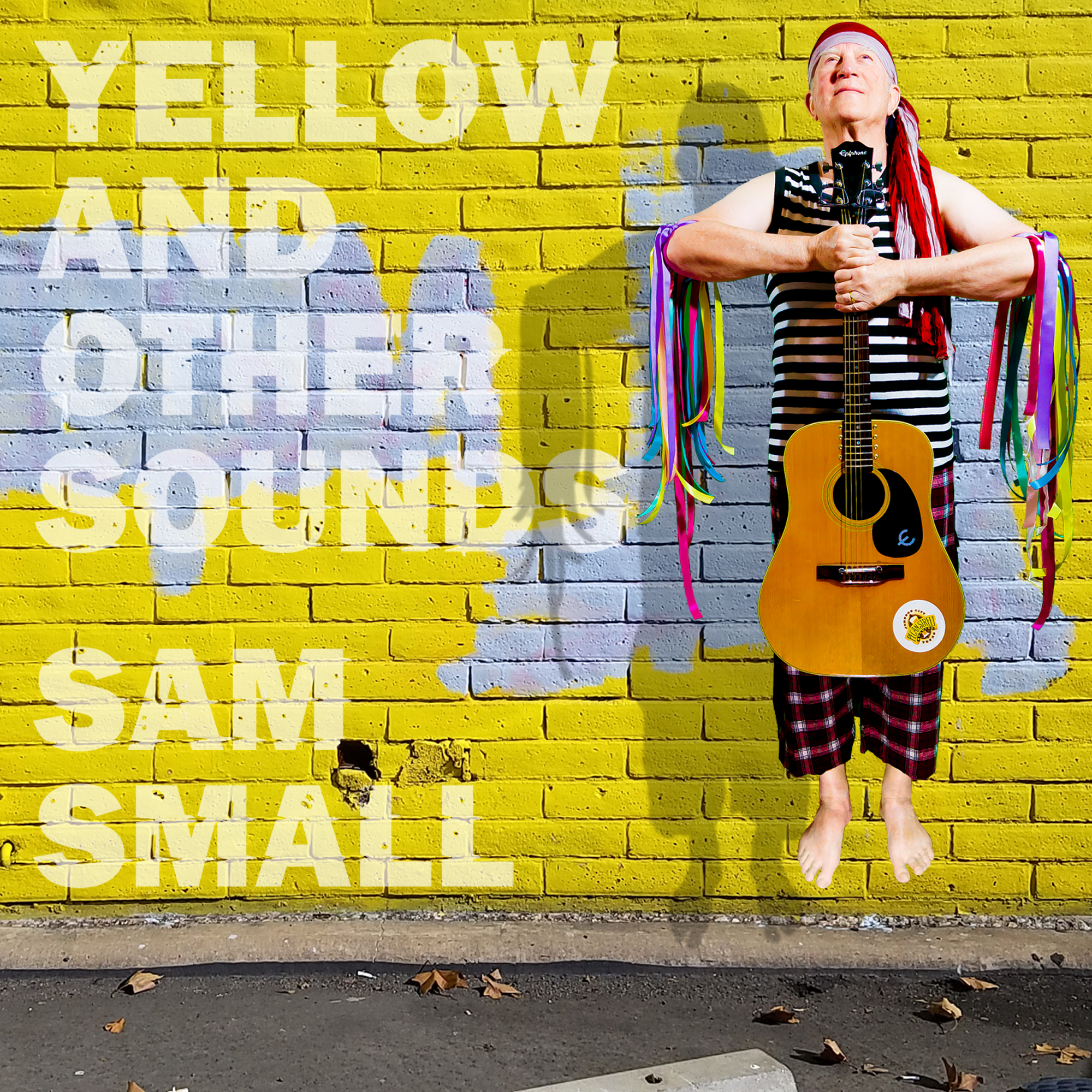 The songs on this album were written on the keyboard, except Belinda May. That’s unusual for me because I write mostly on an acoustic guitar. There was a period when I was very taken with “chord block loops” – that is to say, a chord sequence of four (or maybe eight) chords repeated throughout the song. It gives a wonderful opportunity to experiment with variations in verse melody, chorus structure, soloing, arrangement and instrumentation. I really must write some more. Only “Dreaming” has a standard pop song structure.

The songs express the darkness of loneliness and frustrated efforts to communicate with other human beings. I’ve been there. I’m sure you have too. It’s good to sing about it and to listen to someone sing about it. It can be liberating.

So what does this sound like? What are yellow songs? Well, it can be many things, but all emotional. All touching on our innocence and experience.
And who is the guy floating up that wall? Well, he’s getting to be above it all, that’s for sure. He’s dressed in any old dollar store attire just for the hell of it.
The clickable titles have been mastered and are up on Spotify and all the other streaming platforms.

MAGICAL LIGHTS (to be released)

This was an actual experience in London, UK. I met her at a theater workshop, and we walked homeward together to her place. She didn’t invite me up to her apartment, but we sat on the front door steps, looking into the night and simply talking. It was wonderful. Just talking about anything and everything, and I fell in love with her. I don’t really know what the magical lights were. I think they may have been some sort of security lighting system. But they were transformed by her and her voice. I was determined to make something of it all, but she could see that it would go nowhere. Maybe something worse. I was upset about all this, but thinking back, she was entirely right.

SEASIDE (to be released)

We were a poor family, but every now and then my father would borrow a car from a friend and take us all to the seaside. It was just the four of us. Me my sister, mum and dad. I don’t know why I was so excited about being at the seaside. But I was, especially seeing the watery horizon for the first time through the car windshield. It was amazing, but I’m not alone in that. Most children love it too. I ran into the waves. Built sandcastles. Ate picnic food. Annoyed my sister and had a very wonderful day. Driving back home was sad but sleepy.

HOLD ME (to be released)

This is my recurring nightmare. Nothing horrific. All I see are roads, streets, alleyways, paths, hiways, corridors, dirt roads, tracks and trails. I guess a psychologist might help me out on this, but I guess it’s me traveling but never arriving. Or something else. I love the comforting chords of the “hold me” chorus. Wait for the ending. Down the rabbit hole, I believe.

WITHOUT YOU (to be released)

This is not about dealing with grief, but simply not having your loved one around because they are travelling or out of town for some reason. We can feel lost. Everything seems that much different. Just wandering around the neighborhood. Noticing things. People. Cats. Birds. Remembering chores to do. I’ll go back home and make a sandwich. Perhaps.

ALONE IN THE PARK (to be released)

The words “sitting alone in the park” came at almost the same time as the chords, and I thought it might be a jilted lover licking his wounds. But it began to get darker. The man sitting in the park at night was homeless. Having a mere cigarette paper between myself and homelessness, I wanted to carry on with this dangerous adventure. Yes, desperation and drugs can lead to attacks on passers-by. Not pleasant, not typical, but it happens. This could have been me. It could have been anyone. I hope he survived.

This happened to me. I had done something. Wrong, mistaken, misunderstood or otherwise. She was impressing me that, actually, it was something I did wrong. With a loud voice. I wanted to argue my corner, but at 2am my eyes were closing. Laying in bed gave no rest for either of us. The darkness made it worse. I felt angry, alone and hopeless. But even then, I was trying to see her point of view but failed, which only added to my emotional dissonance. In the fairyland space between wake and sleep, I saw all these images charging about to the rhythm of her voice. I was aware it was madness, but tried to avoid this awful truth. Read the sign, it said. I don’t know what the sign said, but it was something like, “this relationship will kill you if you don’t get out this very night”. Both those things did not happen, but might have.

STAND UP NOW (to be released)

This is a study in depression, but certainly not hopelessness. When I lived on my own in London, UK, I would walk from my apartment to Hampstead Heath (perhaps the most wonderful part of London) to get some fresh air, maybe get some better perspective and decide a course of action. Usually, none of those things happened except the air, but there was a glimmering hope dawning. It was simple. Not complicated. Just stand up and face whatever you need to face. Do it now, not later. Later might be too late. My whole life seemed to becoming a choice between standing and falling. I stumbled, but I’m still standing.